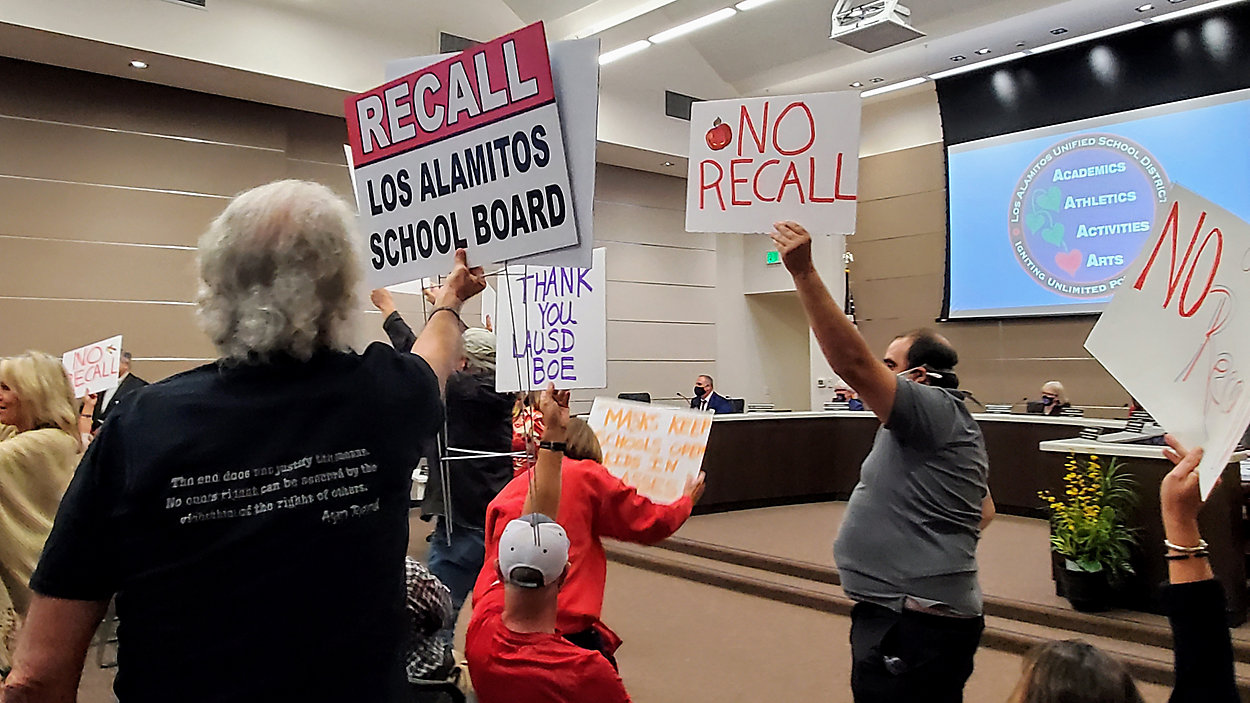 Los Alamitos School Board President Marlys Davidson, who has been a calm presence on the dais during a very tough and trying past 18 months, picked a bad moment to vent some frustrations — uttering a “hot mic” epithet that won’t win friends or influence people.

Davidson, a long-time, popular and award-winning middle school history teacher in the district who came out of retirement to run for school board in 2018, muttered/uttered a disparaging comment during the public comment session one hour and 46 minutes into Tuesday night’s Los Alamitos Schoool Board meeting.  Most speakers spoke against a future vaccine mandate and the board’s seeming unwillingness to challenge the state on this, although at least one speaker disparaged the commenters and those who backed a school board recall.   Davidson seemed to be frustrated after Lauren Roupoli repeatedly and pointedly singled out another school board member, Scott Fayette, for his earlier comments.  After a timer went off, Davidson called for the next speaker and as per procedure, Roupoli’s mic was turned off.  The camera is now on the board but audio indicates Roupoli continued speaking, for a bit but whether she made any remarks directly to Davidson is unclear from the video.  Others in attendance said some in the crowd started chanting “let her speak” but as Roupoli walked away, Davidson turned away from the mic and muttered a low “f— you.”  Whether she was addressing the chanters or Rapouli is unclear.

The comment was apparently not heard in the room, but viewers on Youtube picked it up and within a few hours an edited version of the clip and an enhanced (louder) expletive was a social media battle cry for the school board recall proponents.  By early Wednesday KTLA had its reporter on-site and that report had been picked up nationally by Fox News, the Daily Mail and other outlets.

Roupoli, a Seal Beach resident, has been a frequent speaker at board meetings over the past few years.  When not speaking her Linked In profile shows she has worked at the port, and operated an active part-time online business selling her artwork and designs.

Davidson has since issued an apology, noting that “when members of the public address the Board of Education, they must be heard with respect.”  “I reaffirm my commitment to serve our community with dignity and integrity, and I hope they will accept my sincere apology,” Davidson said.

Her comments did not change the opinions of Roupoli or other speakers at the meeting who called for Davidson’s resignation.

Possibly the most telling part of this latest controversy are the frustrations and unintended consequences of one-size-fits-all state mandates, and feelings of powerlessness which are felt not only by parents, but also by local school board members as well.  [Full Disclosure, this writer has known Davidson and her husband, and some other school board members for many years.  And while they often found themselves on different sides politically, there was always an attitude of respectfully agreeing to disagree.  Tuesday night’s utterances are totally out of character for everything Mrs. Davidson has stood for in the past and I think is an accurate indicator as to the level of frustration.

Below is an original recording of the meeting. No audio is enhanced.